Morty and The Three Little Pigs 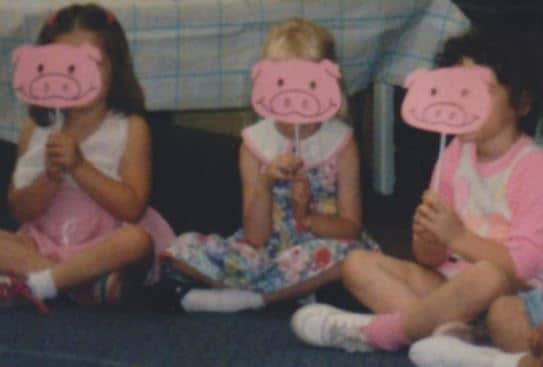 No, Morty and the three pigs is not a fairy tale although it probably could be turned into one.  It is a true story about a day that changed my life and helped me to begin to choose peace over turmoil.  I learned to change my perspective in a big way that day.  But just how DO you change perspective?  Well, the easiest way is by allowing the possibility that “all is not as it seems”, that there could be something else that remains unknown to you. Once you give your mind different alternatives about the situation to contemplate, you can then choose not to dance in drama and fear because other possibilities exist.  It is easy to train yourself to begin to imagine other possibilities.  You just actively look for them.  As an example, today we will focus on driving – something that is guaranteed to push a few buttons.

Driving, especially in congested areas like the one I live in, is always challenging.  Drivers are too slow, too old, too fast, too distracted, too inconsiderate….and the list goes on.  How many times have you yelled at another driver whether they could hear you or not?  How many times have you been in a rush and the car in front of you is taking its own sweet time?  How about getting cut off?  Those things just about guarantee anger and aggravation.

Combine those events with the fact that you, yourself, are impatient, late, not a morning person, tired, cranky (the list goes on) and you have a volatile situation brewing up every time.  Yes.  I, too, was that yelling, pissed-off lunatic in the car behind you when you didn’t signal that you were turning and I almost hit your car! And yes, I can still get that way on occasion. Crazy actions engender fear and fear makes us either run away to hide or lash out.  In driving, we always lash out.  But remember, the point of these posts is not to have you grow wings out of your back and never be ruffled by events again.  The purpose is to give you a different perspective about what is happening so that you have the choice to release yourself from the tension of how you are feeling.  The choice to center your emotions.  Why would anyone CHOOSE to drive upset? 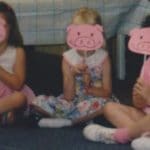 Thanks to Morty & Co., I was around to see my daughter, Angela (R), performing in her preschool play that day.

Astrologically, I was born an Aries.  Aries people are always characterized as “quick to anger” although they also have the ability to quickly cool off.  Bad drivers have always ignited anger in me.  But I was able to change that behavior and my reactions and it was due to a guy I affectionately named Morty.

I remember the day very clearly.  My youngest daughter was in preschool and was doing a play about the Three Little Pigs at lunchtime.  I was working in a town that was about 30 minutes away so every moment of driving time was precious since I was taking an extended lunch hour.  When I left I had plenty of time to make it to the show. But despite my well-planned intention, something else was in store for me.  A giant lesson.  I was making really good time on relatively empty roads, and I was just a few blocks away when a car cut me off and I found myself stuck behind some old guy wearing a hat and driving a big car.  Could it get any more cliché than that? Seriously!  This guy had to be doing less than 20 mph on a 45 mph road!  I was on local roads, no ability to pass and my temper just got hotter and hotter.  All I wanted to do was pass him! I could not be late!

The moment I could pass him legally, I did.  I put pedal to the metal and surged forward, eager to make up the time I lost behind Morty.  (Yeah, I named him)  but I barely had made any progress when ANOTHER car quickly pulled out in front of me from a hidden side street and slowed me down again.  You cannot imagine the words I strung together to express my displeasure!  I was yelling those words – now angry and fearful that I would not get to the school on time.  However, everything changed for me just a moment later.

Despite the newest obstacle in front of me, I was hoping that I would get to the green light at the intersection before it changed to red. Not having to stop for the light would shave a few minutes off my time.  As the anger once again reared its head and I began a new tirade against the idiot in front of me, I watched as a massive accident unfolded before my eyes at the intersection just ahead of the “slow-poke”.  It was horrific. Someone from the opposing traffic ran the red light.  And there was not one second of pause between the thoughts of “Oh My God” and “that would have been me”.  I became flushed with emotion – not only for those in the accident but also for myself. My mind went blank, and then even though my heart was pounding out of my chest, I felt so protected.  I got it immediately. My eyes welled with tears.  Those “jerks” in front of me slowing me down were there to protect me. It is not something I THOUGHT.  It was something I KNEW.  Had those two cars not found a way to slow me down, it very well could have been me in that mangled mess.

That day provided a lesson I will never forget.  I think of this often now when driving behind slow cars, and I don’t allow myself to get angry or annoyed anymore.  In fact, the only time I do still get irritated is when the person is on a cell phone or reading (!) or otherwise engaged in behavior that is not driving. That’s dangerous – for me and for them.  But even then I don’t become enraged.  I have a flash of irritation, I take a deep breath and shake my head.

The truth is you don’t know what you don’t know.  To you, that person has no reason for driving the way they are driving. It frightened you or upset you and you want to lash out.  I get it.  But how do you know that they are not being extra careful by driving slowly because they have something delicate in the car that could fall over or that any bump in the road causes someone in that car pain or discomfort?   That person that just cut you off?  Maybe they really truly did not see you. A lot of us drive, unfortunately, on auto pilot.  It has happened to me and I would guess to many of you.  Sometimes mistakes are just mistakes.  And sometimes those “mistakes” are designed with a purpose that we will never know. There is a beautiful synchronicity to life that we never get to see from behind the scenes but believe me, it exists.  Remember, you do not know what you do not know!  I was lucky enough to see the “why” behind my driving event.  I don’t ever need to “see” the proof again, believe me!

The secret to inner peace is to change your perspective on the situation. And this does not just apply to driving, obviously.  Actively seek to find a way to think about the event that no longer causes you stress, grief or pain.  Allow the possibility that you DON’T know everything; and that “the thing” you don’t know changes everything.  YOU control your emotions and what just happened to you is about YOU and YOUR reaction.  It is not about the other person, no matter what it is that they did.  So next time when you are in traffic, whether as a driver or passenger, stop the hysterics.  Take a deep breath, realize there might be more to the situation than you know and CHOOSE peace.  Then you can amuse yourself with all of the possibilities of why “it” happened to you. (And don’t forget to forgive the driver in front of you.  Unless you are a perfect person, we are ALL guilty of stupid driving behavior whether by accident or design.)  When you can make peace with it in your head, through your thoughts, it will cease to have any importance to you at all.

Morty, I will never know your real name, and you have probably passed on by now (since you were older than dirt when you cut me off that day), but I still hold gratitude in my heart for your playing the part you did on that day. I tried to thwart you in your mission to protect me but it did not work.  You (and the unknown driver) were my angels in that moment and you taught me a lesson I will never forget.

Have you ever had a driving moment like mine?  Have you ever felt as protected as I did that day?  I would love for you to share your story here.  Wishing you perspective in all things…